What Is a Gap Fill in Stocks? – Warrior Trading

A gap fill in stocks is when a stocks price moves in the aftermarket hours above or below the close of the previous day and then trades back through the gap.

Most day traders are familiar with the fundamental analysis tools commonly used in determining which stocks to trade.

Fundamental analysis is the practice of evaluating a number of factors, including a company’s balance sheet, management, strategic initiatives, consumer behavior, and microeconomic indicators, to determine whether a stock is priced correctly based on the intrinsic value of a company.

In many cases, traders using fundamental analysis tools attempt to forecast whether and when the price of a stock will move up or down based on future growth prospects, and they make trading decisions accordingly.

Even though fundamental analysis tools to get a lot of media attention, many traders use another stock analysis to help them make wise decisions.

Instead of analyzing the fundamentals, these traders rely on technical analysis to forecast future prices of stocks.

Technical analysis is the process of predicting future price movements based on historical price behavior within stock charts.

Traders who base their trading decisions on technical analysis utilize a wide list of strategies to decide when to buy or sell a stock. One of the strategies they employ involves trading gap fill stocks or playing the gap.

While the concept is surprisingly simple, successful execution can be challenging. However, some traders have successfully made huge returns with gap-fill trading strategy.

In this article, we’ll explain what gaps are, what types of gaps exist and the meaning of gap fill stocks.

Meaning of Gaps in Stock Market

A gap is an area on a chart where the price rises or falls swiftly without any trading activity in between. This phenomenon often occurs when there is frantic buying or panic-filled sell-offs in the market.

Gaps can be found on a bar or candlestick chart in any timeframe. However, they are more commonly witnessed on the daily chart since traders analyze the information obtained after the closing bell and tend to employ it at the beginning of the next trading session.

Below is a daily chart of Meta Platforms where the stock had a huge gap down after a terrible earnings report: 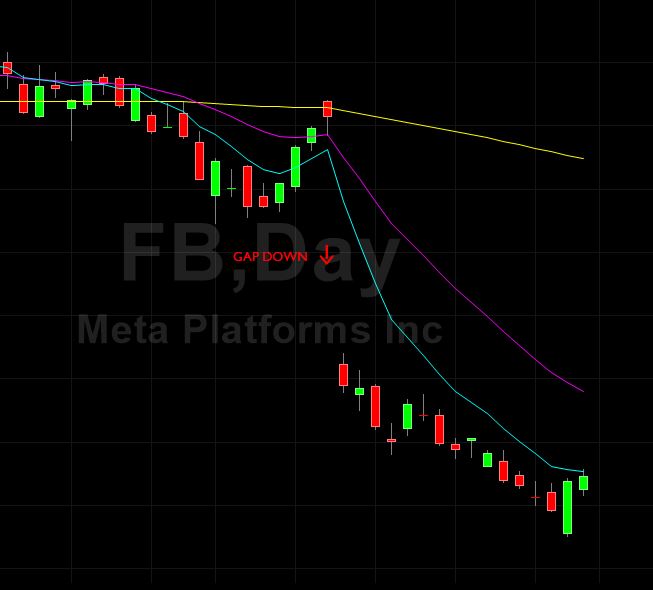 A gap fill in stocks is significant because the market is saying that the gap in price does not reflect market sentiment.

For example, the market gapped down a lot when Russia invaded Ukraine, however it was immediately bought up when the market opened. This tells us the gap down was an overreaction as buyers jumped all over the cheaper prices. 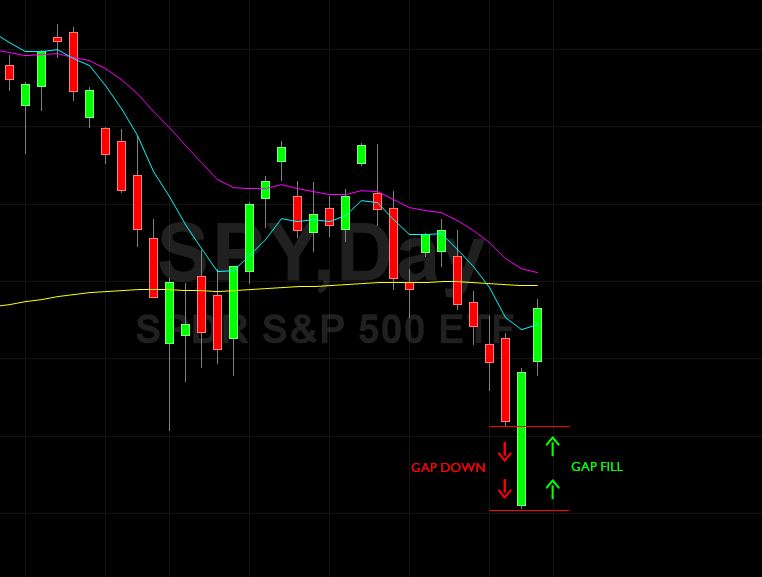 What Causes a Stock to Gap?

As stated earlier, a gap occurs when a stock’s opening price is different from the closing price. Generally, gaps happen in periods of low liquidity, when the market does not have sufficient buyers and sellers to stop unexpected slumps and spikes in stock price.

In the stock market, gaps are usually seen after a trading day ends and the market opens the following day again.

Major events such as company-related news and earnings reports can weigh on the market sentiment after the closing bell, causing gaps in a stock’s price when trading resumes the next day.

For example, if a company posts stronger-than-expected earnings after the closing bell, then the stock is highly likely to gap up when the market opens the next day.

Depending on the prevailing market conditions, not all gaps are the same. There are the four categories of gaps you’ll find in the stock market.

A common gap, also referred to as an area gap or a trading gap, is normally caused by normal market forces and doesn’t need a unique event.

As the name implies, common gaps are non-eventful and regular occurrences. Therefore, these gaps get filled up as quickly as they appear.

On a price chart, common gaps appear as non-linear drop or jump from one point to the next.

A breakaway gap occurs when the price of a stock gaps over a resistance or a support level. This gap is similar to a breakout pattern, but the actual breakout occurs in the form of a gap.

Breakaway gaps signal strong momentum and the price of the stock keeps trending after the gap.

A runaway gap usually happens in the middle of a strong uptrend or a downtrend. This gap represents unexpected change in perception or interest about a stock among traders, followed by a shift in demand due to a spike in buying or selling.

When a runaway gap occurs in an uptrend, it implies a shift in traders’ interest in the stock. If there are some traders who might have been left out during the previous uptrend, they may go on a buying spree once they have noticed that a retracement is not likely to happen. This causes a sudden and significant spike in the trade volume and price.

On the other hand, when a runaway gap appears in a downtrend, it represents the excess liquidity in the market. This may cause a downtrend spiral where panic may hit sellers and sell the stocks, which might push the price of the stock lower.

An exhaustion is a type of gap that forms near the end of a strong uptrend or downtrend, but in the opposite direction of the underlying trend. Exhaustion gaps signal that the trend is beginning to lose momentum, and that a reversal is about to happen.

These gaps are often associated with a surge in price along with a surge in volume. Exhaustion gaps indicate that a stock is making a final attempt at hitting a new high or low.

There is an assumption amongst traders and investors alike that a gap has to be filled, meaning they expect the price to go back to the gap area at a later time.

Runaway and breakaway gaps are thought to have a lower chance of being filled, due to the assumption that the market event which made this type of gap to form possesses a strong directional momentum. Therefore, trading a gap fill amounts to trading against this momentum and the new formed trend.

If you’re looking to trade a “gap fill,” you might want to do so when an exhaustion gap is formed. Exhaustion gaps suggest the directional move is capitulating and potentially reversing cause, and assumes a higher opportunity to trading a gap fill.

To be a successful day trader, one should be able to spot and interpret gaps correctly. Although gaps are common in daily stock charts, they are not free from limitations.

An important concept associated with gaps is ‘filling’. This is a concept where the market readjusts to the stock price level cancelling out the unexpected change caused by the gap.

Failure to identify a gap or react to it may cause one to miss an opportunity to get in or out of a trade, meaning gaps weigh greatly on profit or loss from a trade.

How do I match two ids against the same value (SQL)

What is a Cryptocurrency Wallet?

Health Dangers that Nurses Face Every Day | My Hackers Guide