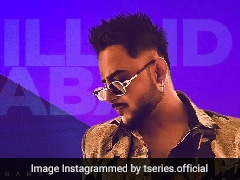 The ultimate night anthem ‘Roz Raat’ sung and composed by Millind Gaba, penned by Gaba and Asli Gold and produced by Bhushan Kumar is an upbeat, up tempo track with hip-hop flavour. Directed by Shabby, this after party song is all about a man cruising the town and enjoying the nightlife in this bright, colourful and vibrant music video.

Says T-Series head Bhushan Kumar, ” ‘Roz Raat‘ is a night anthem and out-and-out party song. Millind has killed it with his energy and Shabby has done a fabulous job in capturing western pop culture in this video.”

Talking about the song, Millind Gaba says, “Roz Raat is a fun party song. The lyrics and music are catchy and the visuals are really striking and highlight the night life. I’m sure my fans are going to love it.”

Adds Asli Gold, “The lyrics of Roz Raat are such that you will immediately sing along after listening to the track. This night anthem is guaranteed to have you grooving.”

Adds director Shabby, “The idea with Roz Raat was to capture the night life, a bunch of friends hitting the town and just partying. It’s a vibe and you’re going to love it.”

Millind Gaba Music MG’s ‘Roz Raat’ is produced by T-Series. With vocals and composition by Millind Gaba, lyrics by Millind Gaba and Asli Gold, the party track directed by Shabby is out now on T-Series’ YouTube channel.

(Except for the headline, this story has not been edited by NDTV staff and is published from a press release)

$35 Insulin Cap Is Welcome, Popular, and Bipartisan. But Congress May Not Pass It Anyway.

Forspoken has been delayed until October 2022 – WholesGame