Nottingham Forest closed in on the Championship play-offs following a thumping 3-1 triumph over QPR.

On-loan Watford striker Andre Gray had given the visitors a 1-0 lead at the break as he scored in a third successive game for the first time in six years.

But a spectacular Djed Spence long-range strike sparked a scintillating second-half comeback from Forest that was completed by midfielder Ryan Yates’ fourth goal in consecutive contests and Brennan Johnson’s 12th of the season.

The result meant Steve Cooper’s men have now won eight and drawn one of their last nine home fixtures, while QPR have now tasted victory just once in 38 visits to the City Ground.

Mark Warburton’s men had made a bright start, however, with Chris Willock particularly menacing.

The former Arsenal man’s exciting burst created an early chance for Gray that was well saved by home keeper Ethan Hovarth only for the former to be flagged offside.

Another exciting raid down the right by Willock led to a further opportunity for Gray that he miscued in front of goal and Lee Wallace could not beat Hovarth from an unfavourable angle.

Forest were only denied a goal from their first attack of the match, though, by a smart reflex save from Rangers keeper David Marshall in the 21st minute.

Marshall kept out a point-blank effort from Yates after James Garner’s deep corner had been met in the air by Tobias Figueiredo and hooked back into the six-yard box by Philip Zinckernagel.

Seconds later, Yates had another excellent chance to open the scoring but failed to direct Zinckernagel’s firmly driven cross towards goal from three yards out. 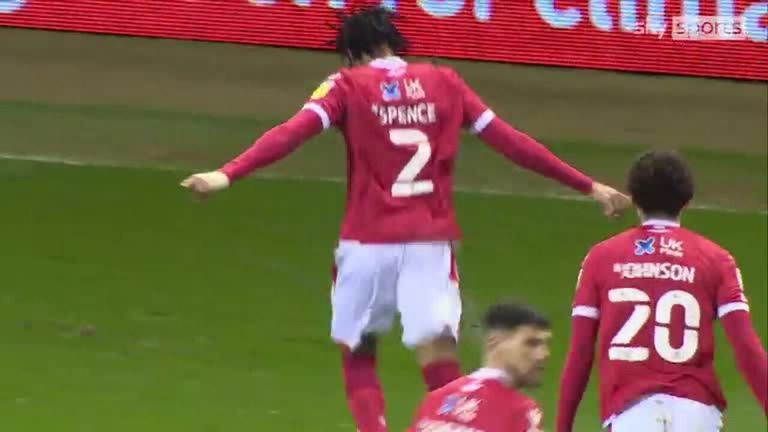 Djed Spence scored a stunner for Nottingham Forest in their Championship clash with QPR.

The visitors suffered a blow just past the half-hour mark when Willock limped out of the action but the persistent Gray was not to be denied after 40 minutes when he spun past Figueiredo to race on to substitute Ilias Chair’s ball through the right channel and blasted a low diagonal shot past Hovarth from 10 yards.

An all-action first half could have still ended level but a stretching Keinan Davis missed the target from six yards after Marshall could only parry Garner’s well-struck free-kick.

The hosts were back on terms, however, 10 minutes after the interval when Zinckernagel’s square pass found Spence and he thundered a 30-yard effort into the roof of Marshall’s net.

Buoyed by a raucous home crowd, Davis then went close twice with a drive that flashed wide and a header from the ever-dangerous Spence’s right-wing centre.

Marshall went on to throw out his left arm to push Zinckernagel’s powerful edge-of-the-box drive around a post but the Hoops keeper was powerless to prevent Yates turning in Garner’s resulting 83rd-minute, right-wing corner from six yards.

Four minutes later, victory was sealed when Sam Surridge charged down the right and sent in a cross that saw Marshall save from Cafu only for Johnson to follow up and blast in from 10 yards.

What the managers said…

Nottingham Forest’s Steve Cooper: “They were a bit better than us for the first 10 minutes but we were good after that and looked like we were going to take the lead after a couple of near misses. Then, they scored against the run of play and that can derail you when you are playing well but, in the second half, we were brilliant.

“We played with a lot of energy high up the pitch, but also passed the ball well and created lots of chances. It took a brilliant goal from Djed to level the scores and sometimes you need something special to start things off but, in the end, they could not live with us and they are a team that have been in the top six for most of the season so, to run over them the way we did, meant we were really good for the win. We’ve scored seven goals in two games now and that’s what the supporters want to see and what I want them to see.”

QPR’s Mark Warburton: “I thought we were good in the first half and started the game very well. Our shape was good and we were causing them problems. Chris Willock coming off was a blow as he’s a dangerous attacking threat for us but we went on to get a good goal and missed a sitter, which was a big moment. They went on to score a 30-yard screamer and we went on to concede from a set-piece, which is the bit that really hurts.

“The goalkeeper then pulled his left hamstring and couldn’t move for the third goal so we’ve got four keepers out injured now, which is quite amazing. Marshy has been outstanding for us and we will need to look for an emergency loan, but it can’t be anybody from the Premier League so we will have to see what we can do.”