An 11-year-old Manchester United fan has raised enough money to pay for over 115,000 meals by walking from Larne in Northern Ireland to Old Trafford.

Ben Dickinson was congratulated by Sir Alex Ferguson, who welcomed him into his private suite ahead of the Premier League game against Tottenham.

The final total will benefit FareShare, the charity supported by Marcus Rashford, who last year appeared on a Sky Sports News Zoom call to surprise Ben after he raised £7,200 by walking a mile a day for 26 days during lockdown.

Ahead of his latest challenge the youngster, who stayed at Hotel Football before the game, was presented with a cheque by Gary Neville. The former United defender and Sky Sports pundit told him he was doing “great work.”

Ben received messages of support from Raphael Varane, Wayne Rooney and Paul Scholes. He was presented with signed shirts from Ferguson and the current first team squad.

Ten-year-old Ben Dickinson is walking from Northern Ireland all the way to Old Trafford in aid of child hunger charity FareShare ❤️ pic.twitter.com/tDTUvjK6b8

The Manchester United Foundation and Richard Arnold were hugely supportive of their campaign and Ben’s efforts will benefit hungry families, raising further awareness of the difficulties facing many households here.

“One in 10 people in the UK struggle to get enough to eat,” said FareShare spokesperson Ali Gourley.

“It is a massive, massive problem so we’re grateful to Marcus and Ben.” 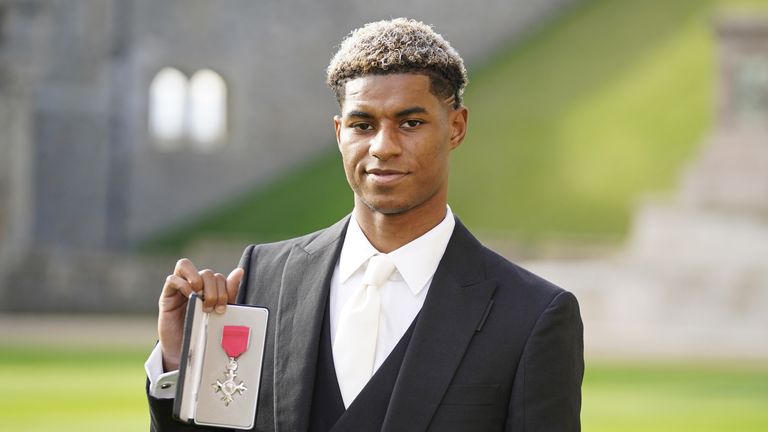 Marcus Rashford vowed to keep his campaign to support vulnerable children after receiving an MBE for his drive to provide children with free school
meals vouchers during lockdown.

Ben was joined on the last leg of his walk by Jane Gregg, daughter of United legend Harry. Everton invited him to Goodison Park and Sale Sharks welcomed him where he met Manu Tuilagi.

The players from his hometown club Larne walked the first mile with him after a push from owner Kenny Bruce and the former NI striker Iain Dowie.

Ben also passed on a pair of personalised shin pads to Rashford as a thank you to “his idol” before he watched Cristiano Ronaldo score a hat-trick to sink Spurs.

He was paraded in front of the Old Trafford crowd 15 minutes before kick-off along with dad Andrew, mum Claire and baby brother Zak as fans of both clubs gave him a warm reception.

Follow every Man Utd game in the Premier League this season with our live blogs on the Sky Sports website and app, and watch match highlights for free shortly after full-time.

Get all this and more – including notifications sent straight to your phone – by downloading the Sky Sports Scores app and setting Man Utd as your favourite team.

Hear the best Premier League reaction and expert analysis with the Essential Football and Gary Neville podcasts, keep up-to-date with our dedicated Transfer Centre, follow the Sky Sports social accounts on Twitter, Instagram and YouTube, and find out how to get Sky Sports.