Longest Vessel Ever To Sail On River Brahmaputra Anchors At Guwahati 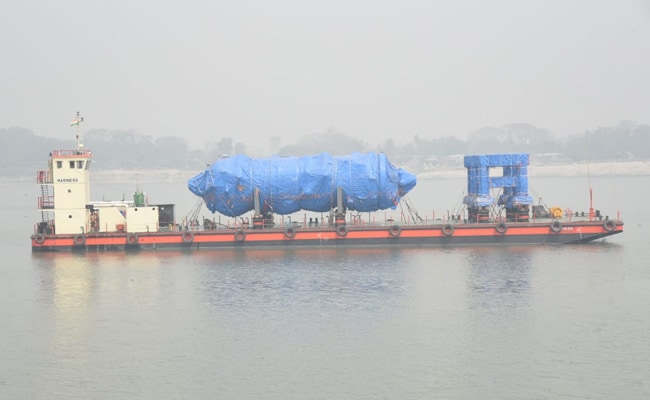 The 90-metre long vessel, MV Ram Prasad Bismil, is loaded with a draft of 2.1 meter.

The longest vessel ever to sail on river Brahmaputra was anchored at Pandu port in Guwahati after completing its pilot run of heavy cargo movement from Haldia Dock in Kolkata.

The 90-metre long vessel, MV Ram Prasad Bismil, is loaded with a draft of 2.1 meter. The vessel along with two barges – DB Kalpana Chawla and DB APJ Abdul Kalam – carrying 1,793 metric tonne of steel rods was flagged off from the Syama Prasad Mookerjee Port in Haldia by the Union Minister for Shipping, Ports and Waterways Sarbananda Sonowal flagged them off on February 16.

The pilot run laid down the path for commencement of barging operation from Kolkata to Guwahati through Indo-Bangladesh Protocol Route (IBRP).

The engineering marvel of this consignment remains at maintaining the minimum navigational draft of at least 2.0 meters, especially on critical stretches like Sirajganj – Daikowa stretch of IBPR.

”As the pilot run of this longest vessel plying on the Brahmaputra anchors a success today, we must recognise that this was made possible by the team to chalk out a working route during this season of challenging depth at many stretches”, Mr Sonowal said while joining the programme virtually from New Delhi.

He also thanked the Prime Minister, the Bangladesh government, Assam Chief Minister, Himanta Biswa Sarma and the governments of West Bengal and Bihar for the support provided for the successful completion of this pilot run.

The Inland Waterways Authority of India (IWAI) as well as Bangladesh Inland Water Transport Authority (BIWTA) worked together for the historic cargo movement can move smoothly.

The vision of Prime Minister Narendra Modi is to energise the ”Ashtalakshmi potential of Northeast to power the growth engine of India under his vision of ‘Transformation through Transportation,” Sarbananda Sonowal said.

”This is not only the cheapest and ecologically most adept mode of transportation, it also allows the long-awaited connection for the business of Northeast through the marine network with the rest of the world”, he added.