Jurgen Klopp exclusive interview: Liverpool’s title hopes, his strongest squad, and his vision for the future

He might have thought the title race was over but Jurgen Klopp knows now that it is on again. He should never have doubted it.

“When I go back through my career I cannot remember very often when it did not go to the last match,” he says.

“Unfortunately, not always winning it, sometimes staying in the league or whatever. I don’t know exactly what it is about me but it happens quite frequently.” Klopp is speaking to Sky Sports before his press conference on Tuesday. In a small room, with the camera lights on him and a mug of coffee in his hand, he is reflecting on the events of the night before. Events that have raised the excitement levels among supporters.

He watched Manchester City draw away to Crystal Palace on Monday. “Around 65 minutes, for analysis reasons. What are they doing in these situations? Who is playing?”

As a result of those two dropped points, Liverpool know that 10 more wins – and remember, they have won their last eight – will take them to the Premier League title. Easy, eh?

Now it is time to get serious.

“When you really think about it, in the Premier League, with the opponents we face, one of them is Manchester City, obviously.

“With all due respect to all the opponents we also have Manchester United, Tottenham, we have to play Villa away, Wolves in the last match, all these kind of things.

“It is nice that we are having these discussions because it means that we are close enough to kind of have a chance. It is better than being 20 points behind. But all we can do is try with all that we have to win the next football match.

“The most important one and the most difficult one is now.

The timing is awkward. The Gunners have won five in a row.

“It is a tricky one because they are in a very good moment, Arsenal. They are at home. I don’t think there is any team in the world that would go to Arsenal and count the points already, adding them on before you have played the game. We will not.”

Even so, for all the caveats, for all the attempts to downplay the situation, the dynamic has changed. Midway through January, the gap between City and Liverpool was 14 points, albeit with two games in hand. What once had appeared over is clearly not.

It took a huge effort just for Liverpool to reach this point. “We had to fight through this. It was super intense. We had five games in 13 days. We had to win all of them.” It needed a penalty shootout in the Carabao Cup and a first-leg lead over Inter, but they did it.

The players, hungry for more trophies, are now on high alert.

“We are on our toes, definitely,” says Klopp.

“But we are used to that from the last few years. Last season we had to get results in I don’t know how many games in a row just to make the Champions League. The year before that we won the Premier League so that was different for many reasons.

“The year before that was a massive race right until the last day.”

There is a difference in Liverpool now. That season, Mohamed Salah and Sadio Mane both started each of the last 22 Premier League games. That is unlikely to be necessary this time around, or even optimal. There is a depth at the club that was not there before.

The theory throughout what can now be called an epic rivalry between two teams that Jamie Carragher described on Monday Night Football as the world’s best, has been that, while Liverpool might have the starting line-up, Manchester City have the squad.

But Liverpool won the Carabao Cup, ending City’s four-year dominance of that competition. They are in the quarter-finals of the Champions League and the FA Cup. “That is a testament to that, actually,” says Klopp. “We have options if we need them.”

The fabled front three of Salah, Mane and Roberto Firmino has been added to. Only Salah has scored more Premier League goals than Diogo Jota this season. Luis Diaz, the Colombian forward signed from Porto in January has made a swift impact too.

Is this the strongest squad that he has had?

“Of course, it is. Funnily enough, apart from Luis, it is the same squad that we had when we started the season. We had this strong squad, they were just unavailable. Now they are available. That makes it the squad that we always wanted to have.”

As a result, Klopp has the chance to rotate strategically rather than because of the need for rest. Maybe Jota will provide the penetration against Watford, perhaps there is a full-back who will be fodder for Diaz, while Firmino can lead the press on that big European night.

“Yes, we can do that now,” he says. “It is always in our thoughts because of the load and the intensity of the period we are in. Bobby was injured but now he is back so that gives us another option again.

“It is crazy because we still have Divock and Taki on top of that.”

Divock Origi’s stoppage-time winner at Wolves delivered two of Liverpool’s 66 points. Takumi Minamino has scored nine goals in all competitions this season but did not even make the squad for the 2-0 win over Brighton on Saturday lunchtime.

“It is incredibly hard for him and for me as well because it is really tough these kind of things. Taki is in an incredible moment.” 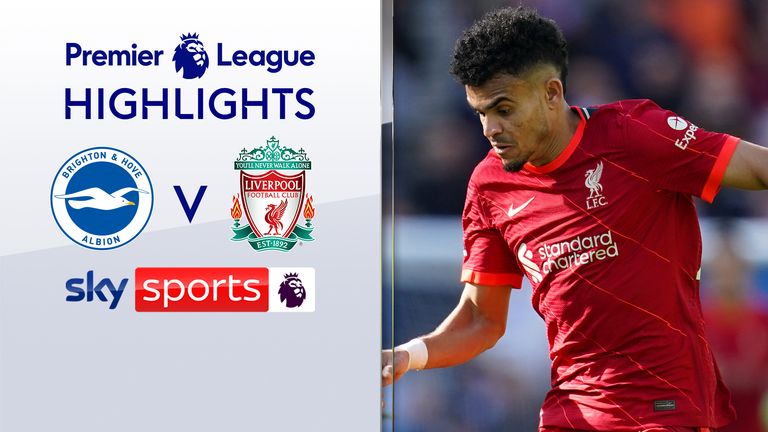 FREE TO WATCH: Highlights from Liverpool’s win at Brighton in the Premier League

Klopp was reflecting recently on what might have been possible had he been able to keep Borussia Dortmund’s double-winning team of 2012 together. The hope is that this Liverpool squad will stick together but he knows there is too much talent to keep everyone happy.

“It is unlikely with the size of the squad that we now stay exactly like this together. For sure, some of the players do not play often enough for their own understanding and we will see what will come in the summer and find solutions for those situations.

“But the core of the group has to stay together.

“There is no doubt about that.”

That core group is evolving. Klopp wants Liverpool to thrive through to 2024, when his contract expires, and long beyond that. He envisages even better times ahead.

“Football is always for now,” he says.

“But it is for tomorrow as well, that is what we have to make sure.”

Ibrahima Konate, the 22-year-old defender signed from RB Leipzig, will help. “We did quite well because we have brought in an incredibly talented, very young centre-half, which massively made sense. Diogo is at the best age. Luis is at the best age.” Both are 25.

“Yeah, some of the other guys, they are not old but in three or four years you might call them that. But for me, the best time for them is yet to come.

“But we have to prepare the club for the time after these boys as well because there must be a time after us and this time should ideally be more successful than we are now.”

The problem? That is obvious.

“You never play alone. There are other teams as well and they all want to improve.”

And that brings Klopp back to the here and now, and yet another hectic end to the season. “If you reach March in an interesting part of the table, in the quarter-finals, in all the competitions, then it looks like it could be a really good season,” he says.

“Being there, being ready for the fight of your life is a challenge.

“But the boys are greedy in a good way and hopefully they can get something from it.

“The finishing line is never straight and you go over it at full speed, you limp over it.