Richie Smallwood set the Tigers on the way inside four minutes before Ryan Longman fired in his fourth league goal of the season to make it five away games without defeat for Shota Arveladze’s men.

The Georgian named just one change to his side as Regan Slater replaced Greg Docherty, whilst the Sky Blues were forced into a makeshift back three as a result of injuries to Kyle McFadzean and Michael Rose.

Ben Sheaf and Dom Hyam came into the Coventry back three, who were still without Mark Robins and Adi Viveash following positive Covid tests on Saturday morning.

Dennis Lawrence, who took charge of the 4-1 win against Sheffield United at the weekend, and goalkeeping coach Aled Williams also tested positive before the game, leaving under-23s head coach Luke Tisdale in charge.

The Tigers were ahead with their first attack of the match when George Honeyman’s reverse pass allowed Smallwood to fire his shot straight at Sky Blues stopper Simon Moore, but his effort squirmed under the 31-year-old as Smallwood claimed his second of the season.

Coventry reacted well to going a goal behind and Gustavo Hamer’s cross-come-shot forced Hull keeper Matt Ingram into a full-length dive to prevent the Brazilian’s effort finding the top corner.

Matt Godden saw his effort blocked before Sheaf scooped the rebound over the bar. 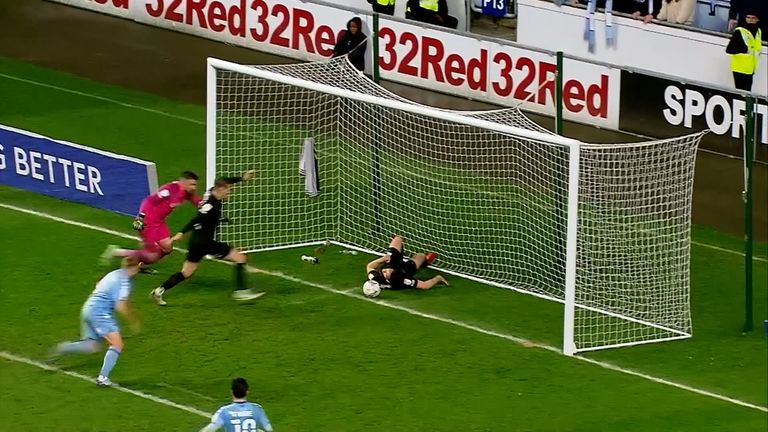 Coventry were certain they had scored against Hull after Ian Maatsen’s initial shot was saved by Matt Ingram, the ball then trickled towards goal before the visitors cleared it, but the referee checked his watch and waved play on!

Arveladze’s men posed more than a threat on the counter-attack, most notably through Keane Lewis-Potter, who had already provided an inviting cross for Tom Eaves to head for goal when he took down a diagonal ball and squared for Eaves, who would have had a certain tap in had the winger’s pass not been inches ahead of the frontman.

Lewis-Potter was left to lament a brilliant Moore save as he cut in from the right and took aim at goal from outside the box, but the former Sheffield United stopper sprawled across goal and pushed the 21-year-old’s effort onto the post.

From the resulting corner, Sean McLoughlin’s knockdown was taken down smartly by Longman who thumped his half volley in off the bar to double the lead.

Coventry continued to push to half the deficit in what was an end-to-end first half, Callum O’Hare cutting inside after he was released by Fankaty Dabo, but his left-footed effort was straight at Ingram.

It continued to be an open game after the interval, Dabo picking out stand-in captain Godden whose effort was smothered by Ingram at point-blank range.

Eaves had a chance to stretch the lead further but his effort was beaten away by Moore, before Godden’s powerful strike was headed to safety by Alfie Jones.

There was still time for controversy before the full-time whistle as Ian Maatsen’s strike at goal cannoned off Jacob Greaves and then Ingram before appearing to cross the line, but referee Thomas Bramall waved play on to the dismay of Coventry players and fans alike.

What the managers said…

Coventry U23 head coach Luke Tisdale: “We didn’t start very well. I thought we reacted OK to the goal to be fair and we had large spells of possession like we always do. It’s difficult to break them down and I thought they defended really well, they get a lot of bodies behind the ball and made it really difficult for us.

“Frustrating is a good word to use. Everyone knows those performance levels we haven’t seen a lot this season but we’ve got to find a way of moving on quickly as the games come thick and fast. It felt like there was a lot of misplaced passes. Again, that is not really a Coventry City thing that we’ve seen a lot this year so sometimes these things happen, nobody is very happy about it but it’s about how we and the players react.”

Hull’s Shota Arveladze: “We know we owe our supporters a good game at home and this performance will give a good message to them to come back and be around us. Our home performances are not as good as our away performances but I don’t think it is about the character of the team. Probably we have a little bit more pressure at home to dominate more and we need time for that.”

“When you win, it is easy to not look down and not ask what others have done. The games get less and if you have a gap, it is to your advantage. Teams have to win three or four games to catch up. It was a good game to watch. We only had one day to prepare and we got off to a perfect start. We created in the first half and had two or three other chances. In the second half we spent more time defending and did well.”

All England Open 2022 Finals, Lakshay Sen vs Viktor Axelsen Live Streaming: When and where to watch in India