Some of the bidders for Chelsea are considering joining together to form a super consortium to buy the club.

Candy has the funds and backers in place to make an offer for Chelsea this week. He has promised to give Chelsea fans a seat on its board if his bid to buy the Stamford Bridge club is successful.

Other bidders are particularly keen to team up with him because he is a lifelong Chelsea supporter and because of his background in developing property in central London.

Candy also held talks with former Liverpool and British Airways chairman Sir Martin Broughton, another lifelong Blues fan, about such such a deal.

In an interview with Sky Sports News before Chelsea’s Premier League victory over Newcastle on Sunday, Candy revealed his passion for the club and his desire to become Roman Abramovich’s successor, who was sanctioned last week after announcing his desire to sell the Blues.

“I’ve supported Chelsea since I was the age of four,” Mr Candy told Sky Sports. “My dad was asked to play for Chelsea. I love Chelsea. I don’t mind where it ends up, even if it’s not with me, as long as it’s in safe hands.

“One hundred per cent [the fans need to be included in ownership] and they should be involved. Both on the board and economically.”

The UK Government have suggested to Chelsea they could start selling match tickets through a third party organisation to get past the sanctions placed on owner Abramovich.

The Blues cannot sell any more tickets to their fans – nor release any away tickets to visiting fans for Stamford Bridge games – under the licence handed to the Russian owner and the club last week.

Chelsea requested this weekend’s FA Cup quarter-final at Middlesbrough be played behind closed doors as the lack of Blues away fans there would damage the “sporting integrity” of the fixture and the competition. However, the west London club revoked that request after strong backlash from the football community.

However, the government want to let Chelsea start selling tickets again as soon as possible and one of the proposals they are working on is to hand over responsibility for selling tickets to a third party.

A third party would oversee the distribution of tickets to ensure that Roman Abramovich was not benefiting from the proceeds in any way. 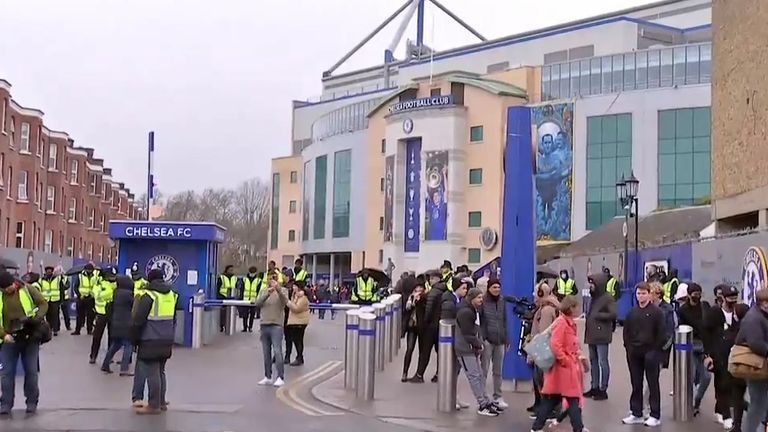 Bids to buy Chelsea have to be in with Raine Group by Friday, but interested parties will have to show proof of funds before they are given access to financial details about Chelsea.

There have been about 200 expressions of interest but many are not believed to be serious contenders. The Saudi Media Group are reported to have made a bid but any deal linked to Saudi Arabia would be difficult to complete.