Alfie May interview: Cheltenham striker on his drastic improvement, scoring four against Wycombe and turning down USA move

The 20-goal-a-season striker is a rare commodity in football; one craved by managers far and wide.

And while Alfie May had a reputation as a lethal marksman during his non-league days, given his record since turning professional as a 23-year-old just over five years ago, there was nothing to really suggest that Cheltenham had one on their hands when he joined from Doncaster in January 2020.

When he helped Michael Duff’s men to the Sky Bet League Two title in 2020/21, he only managed nine in the league and this season, he had scored just five in his first 23 appearances in all competitions.

It was not for want of trying – far from it – but at the tail end of 2021, something seemed to just fit into place. And since he scored in the 2-0 win over Gillingham on November 23, he has netted 16 goals in 21 games.

Understandably, his confidence is sky high right now – and building by the week.

“Since I have been at Cheltenham, I have been on little runs for three or four games. But to score eight in six games throughout February was a massive confidence boost,” he tells Sky Sports, in an exclusive interview.

“The gaffer gives that trust and belief in me to hit the ball in the back of the net and it’s important for me to do it. This has been the best season since I’ve been a professional footballer.

“I believed in myself, but it was just a case of having a manager to believe in me and play me week in, week out like the gaffer does. On current form, I’m buzzing and every game can’t come quick enough; I’m feeling confident in front of goal, having less touches and striking the ball well.”

This significant increase in his attacking output is not just down to encouragement, freedom and belief alone, though.

“This season I’ve got in the gym more,” he says. “I used to go in there, but just did little bits – I didn’t want to get big and lose the edge over five to 10 yards that I have; it panicked me when I did get into the programme that if I did a lot of upper body, I would lose the pace.

“This year, with the help of the sports scientist Josh Harris, I’ve bulked up and I’m a lot stronger.

“I do extras after training, too. I do a lot of shooting with the coaches and I’ve never taken set-pieces before and now I’m on them here. One day I put a good ball in for goalkeeper coach Dan Watson – he put me on them and now I’m on free-kicks and corners!

“I’ve added things to my game and I’m becoming a bit of a leader, given my age, too. We’ve got a young squad, so it is important that I try and lead from the front.”

He has formed a partnership with one young player in particular: 20-year-old Spurs loanee Kion Etete.

The towering target man only arrived at the Jonny-Rocks Stadium from north London in January, but has assisted four of May’s goals in just eight games.

“Kion has been superb since he came in and I work really well with him,” May adds.

“Because he is such a big presence, he brings the ball in well; I don’t think I’ve had someone like him since I’ve been a pro that does what he does. Defenders get sucked into Kion and two defenders go on him and they leave me free.

“Every game he has got his shirt ripped and is getting clattered.”

The blistering form of May – who once balanced work as a timber framer for his brother’s firm and playing semi-professionally – saw him win the Sky Bet League One Player of the Month award for February.

One game in particular stands out like a sore thumb – the 5-5 draw with Wycombe on February 19. He scored four that day.

“It was crazy – I don’t think I’ll ever play in another match like it! It was like a basketball match. When they went 3-1, we came in at half time and said it was a restart; there were four goals in that half, so we said let’s go and get four goals ourselves.

“It was like they just didn’t think about me being there and Kion was taking all of the smash, bang and wallop and I was getting through.

“When they scored two in the space of a minute to go 5-3 up, I thought it was going to be one of those days where we’d get the next one and then they’d go and get two more. But credit to us, we never gave up and I think that’s one good thing about us as a group. We work hard, we’re honest and we try and do the best we can in this league.”

Does a performance like that give him an indication of the level he is currently at?

“It feeds me confidence. Wycombe are a massive club in this league and were relegated from the Championship last year, though they almost stayed in it.

“When I score against the bigger clubs, my mates ring me up and ask me if I feel as though I could go to the next level. But I’m very grounded and I try and take it game by game. I never try and go above my station – I stay at my level and concentrate on the next game.”

His form has, naturally, attracted attention from elsewhere. Most notably from USL Championship side San Diego Loyal, who are co-owned and managed by USA legend Landon Donovan.

May is up front about the fact that, to an extent, he entertained the idea when it was pitched to him in January.

“They were happy to pick up my kids and my wife to ship us over there to start a new life in July,” he explains. “When my agent called me, it was like ‘Wow!’ but my wife said no straight away! But she looked out of the window one day and it was raining hard – she rang my parents and told them we were going to San Diego as it’s warmer over there!

“I sat on it for a few days, but you have a limit time to get back to the club and I sat down with the gaffer and he was open and honest with me. He said that he doesn’t believe I’m finished. 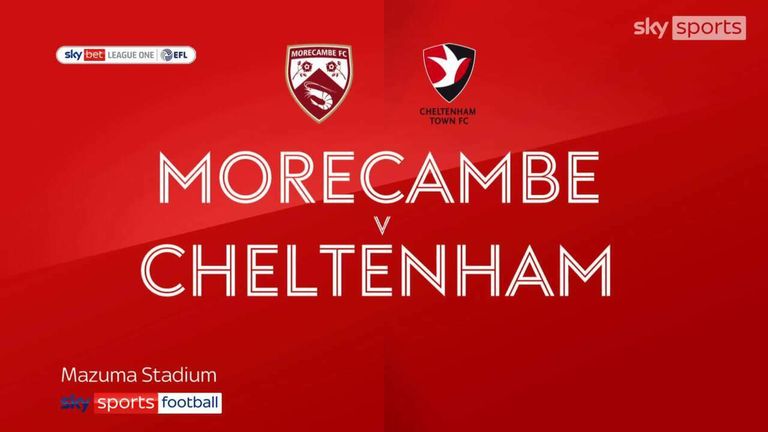 Highlights of the Sky Bet League One match between Morecambe and Cheltenham.

“He said that my name is on the map at the minute in the UK and the minute I leave to go to America, my name will come off it. And then I might only have 18 months over there.

“He spoke as a professional footballer to me and I felt like that was important that I knew what he wanted from me and that he wanted me to stay and sign a new deal. I’ve had people say that they bet I wish I didn’t sign that contract, but I just try and ignore it all because I know that personally, for me and my family, it was the right thing to stay in Cheltenham.

“But if something like that comes up in three, four or however many years, it’s definitely something to look at.”

Now he is under contract in Gloucestershire until the summer of 2024.

His tally of 18 league goals – just under a third of Cheltenham’s total of 54 – have helped the club to the relative comfort of 13th heading into the final stretch of games. The Robins are 19 points below the play-off places and 14 above the relegation zone.

It would take an almighty slip-up for them to relinquish their third tier status now, but there is no complacency from May.

“We sat down at the start of the season and wrote down what position we’d like to finish the season in. Everybody had different answers and as a group, we knew it was going to be difficult as there are some big teams in this league. But we knew that if we did everything that we did last year with sticking together, working hard in training, we could just see where it took us.

“We still talk about the fact that relegation is only behind us and we can’t get carried away. We know our levels, we know our standards, we know what we set as a group, so it’s important that we don’t think it is done.

“There’s still nine games left, but we want to be here next year.”